Tips for Being a Sells Agency Intern 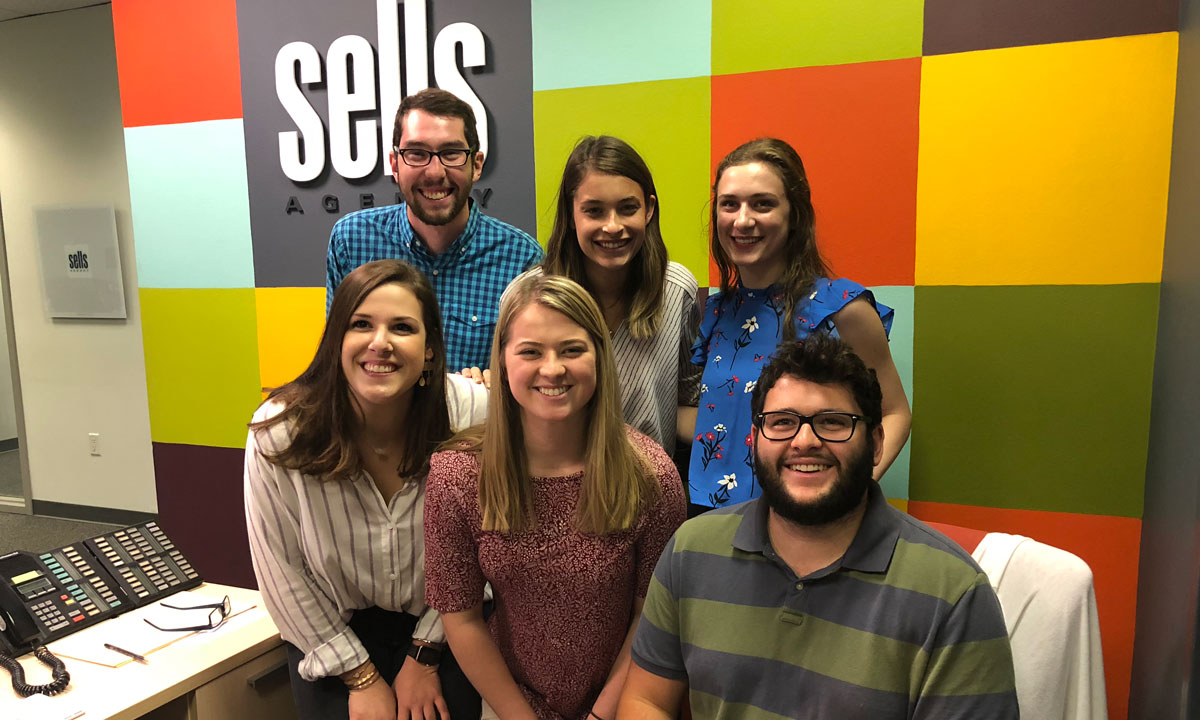 Our goals for this summer were varied too, but we all wanted to learn about the advertising industry from the inside. And we did (or at least, we like to think we did). So we’ve recorded the lessons we learned at Sells Agency for whoever might fill our shoes. You’re welcome. Have a blast.

1. Don’t be afraid to ask questions.

If we could give only one piece of advice, it would be this. Internships are meant to teach you something, but you must be eager to learn. None of us had a clue what we were doing at first, but we were willing to admit what we didn’t know. If you’re confused, worried, or just downright lost, ask someone for guidance. There are plenty of people around who would love to teach you about what they do.

Honestly, you don’t have to listen that hard. His voice carries.

3. Show up every day ready to work.

We’ve all been that intern whose only job is to fetch coffee for the employees. This is NOT that kind of internship. Expect to talk to clients, write content that actually gets used, and never be asked to get coffee for someone else. The people at Sells Agency see potential in their interns and trust them with actual projects for clients. This is a good thing.

4. Get to know your fellow interns.

You’re all in this together. The better you get along, the more productive you’ll be, and the more you’ll enjoy your time at Sells. The six of us got to know each other over our weekly lunches (we recommend Three Fold, by the way).

5. Expect Landrey to bring out BeanBoozled.

You don’t have to play, but we suggest that you do. This used to be a company intern tradition, and we’ve brought it back for your enjoyment. You’re welcome.

6. Spend some time on the server.

Sells has had some big-name clients over the years and created some impressive campaigns. If you’ve got a spare minute, browse the server and look at the work Sells has done. You might find some inspiration.

The five of us at the Little Rock office were notorious for walking in together, leaving together, and generally being hard to pass in the hallways because we always travelled in a group. Ginger called us “the ducks.”

Even if you don’t know how to do something, say yes anyway. Agree to do it. You’ll learn along the way, and it will be so gratifying when you do it well. After being thrown a huge video project at the beginning of the summer, we spent a solid week wondering how we were going to pull it off. We didn’t feel qualified to be heading up a massive project for an actual client. But we did it, and we’re incredibly proud of what we created.

9. Don’t forget to turn the lights off in the company car.

If you--or someone else, like an employee *cough cough*--leave the lights on, the battery will die and then someone will have to take it to be fixed and you will feel terrible, even though you’re pretty sure it wasn’t you that left the lights on. This is also just a good life tip.

10. If you spend your time in the Fayetteville office, visit the Little Rock office at least once.

Lauren had an awesome summer working with Charlie in the Fayetteville office. She came down twice to visit us in the Little Rock office. Spending time in each of the offices showed her two different environments all working toward the same goal for their clients. The Fayetteville office definitely felt like home to Lauren, who enjoyed hanging out with Charlie. He’s pretty cool. Get ready for a chill summer talking about tacos and writing blogs.

11. Don’t be surprised if you have to take an impromptu road trip with the boss.

Bronson bravely accepted a mission to Dallas after only three days in the office. Here are a few things he learned about Mike:
He loves country music.
He drives like a bat out of hell.
He’s a big fan of bicycling.
He used to do theater.

12. Get to know the people around you.

The people at Sells are super approachable (except for Thad, maybe. But he’s still pretty nice). Even if you love the work you’re doing, your time here will be defined by the people around you. Make it worthwhile and get to know them.

13. If you leave your computer unattended, log out of your email.

Bronson was targeted by Vince, who emailed Ike a confession of love.

Watch your back, interns.

14. On rainy days (or unbearably hot ones) take advantage of the walkway on the second floor of Simmons tower.

It’ll take longer to get to your car, but it will protect you from the elements.

Your work hours might change based on your project. Our assignment was to film a promotional video for a local non-profit called PATH. During the week we spent filming, we were sometimes the first people in the office and the last ones to go home. But we all agree that those were some of our favorite days, when we got to bond over pizza and ice cream on set.

16. Keep an extra pack of gum in your desk drawer for Matt.

He will undoubtedly ask. Impress him by having his back. Caroline’s office was closest to Matt’s, so she tried to keep her drawer stocked. Spearmint is his favorite, but he’ll take wintergreen in a pinch.

17. Don’t forget to put your hours into workamajig.

Yeah, it’s actually called that. And there’s a pizza party on the line. Also, the company’s money.

The six of us are all so incredibly grateful we had the opportunity to learn from Sells Agency. We’re walking away from this internship with a deeper understanding of the advertising industry and more knowledge of life after college. We did a lot of good work, but we also had a lot of fun. We’ll miss it when we go.